It has been a rollercoaster ride for Cyberpunk 2077 this year. Cyberpunk went from being the most anticipated game of the year to having thousands of forums filled with angry gamers complaining about the game. With this massive clash, CD Projekt Red has issued another statement for its fans. CD Projekt Red will issue refunds for retail purchases linked to Xbox One and PS4 versions of the game. Bugs and issues of game performance plagued the PS4 and Xbox One versions of the game. CD Projekt Red will now issue Cyberpunk 2077 refunds even if it means a loss for them.

The time frame for cyberpunk 2077 refunds span between now and December 21st. Therefore if you want a refund on your respective copy, you better send it along. 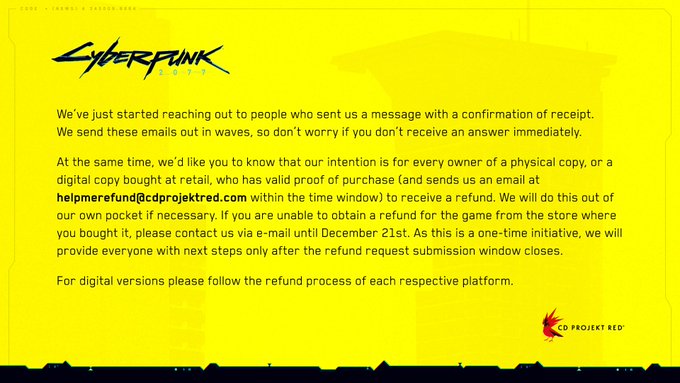 CD Projekt Red have sent a follow up statement for this. It addresses the gamers asking them to be patient if they have not received a reply yet. This is because of them sending out the corresponding replies as waves of emails.

What if the local store declines a Cyberpunk 2077 refund?

Not to worry as CD Projekt Red have solved this exact issue through its most recent statement. If the local seller is refusing a refund, you are advised to gather a proof of purchase for your copy. Once the relevant proof is found, mail it over to [email protected]

Take into note that the relevant mail has to be sent before the time window for cyberpunk 2077 refund submissions expire. According to CD Projekt Red, they provide the owners with the necessary steps required to follow in order to get their refund once the submission period expires.

What if you purchased a digital copy? 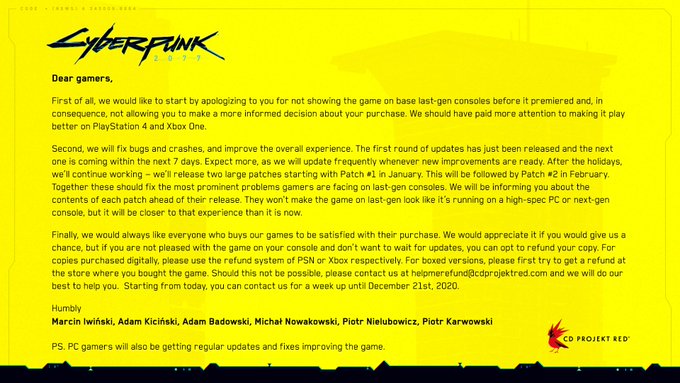 This is where it gets quite complicated. CD Projekt Red told its fans to get their refunds through both Sony and Microsoft depending on your console. But earlier this week, Sony declined any refunds to the game because of its strict refund policies. However, the matter seems to have been solved out by now as Sony removed the game from its store. Microsoft has accepted refunds for the game. However, the game is still available for purchase on the Xbox Store if one needs it.

BestBuy have also started accepting refunds for Cyberpunk 2077. So if you need a refund your own copy you go right in.

Remember gamers the submission window ends on December 21st 2020. So whatever you are doing, be quick with your decision.